Hangin' with My Idol....(the day I got to ride along with Mr. Predock!) 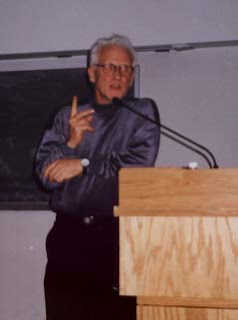 The annoying staccato rhythm emanating from the telephone brought me out of a panic driven daydream. I don’t know how long the handset had been locked in the vise-grip of my left hand. I don’t know how long I had been blankly staring at the wall in my office. All I knew was that Antoine Predock, FAIA,  was coming to town and I had been invited to accompany him all day. Never mind the office, never mind the deadlines, never mind the anxiety. This was a very, very good thing.
Now somewhere between the realm of idolatry and obsession lies sincere, unabated hero worship. I had revered Predock’s work from afar since he first visited Clemson University while I was a graduate student twelve years ago. Since that time, he has escaped his southwestern regionalist moniker and  was now competing for work on a world-wide scale against the likes of Gehry, Pelli, Stern and Mayne. To be granted a semi-private conversation with the great American Architects, past or present, is either the stuff of dreams or hirings and  firings. But unlike Frank Lloyd Wright and his Taliesin apprentices, I did not have to pay “tuition” to obtain an audience with this talented architect. This “joyride” was actually a very fortuitous byproduct of the Kids in Architecture Program.
The Kids in Architecture program was developed as a themed program for elementary schools to rival the attraction (no pun intended) of magnet schools. Summit Drive Elementary School in Greenville, SC has adopted architecture as its school-wide theme. Designed to serve as the central “hub” with other elementary schools in the area serving as the “spokes, ” these first through fifth graders are regularly exposed to architectural related topics such as shapes, materials and buildings. Clay Gandy AIA, an architect with Batson Architects, has developed a partnering association between Clemson University’s School of Architecture, the South Carolina Governor’s School for the Arts and Humanities and Summit Drive Elementary. Mr. Gandy’s resourcefulness, adamant persistence and AIA Greenville sponsorships have created today’s scenario, bringing Antoine Predock from New Mexico to South Carolina.
His resume speaks volumes about his academic credentials. He received a Bachelor of Architecture from Columbia University in 1962, won the Rome Prize in 1985, became a Fellow of the American Institute of Architects in 1981, a visiting critic at SCI-ARC and Harvard and was the first Robert Mills Distinguished Professor at Clemson University in 1995.
Until his meteoric rise to national prominence in the late 1980’s, he may have been the southwest’s best-kept secret, but he was hardly the overnight success that some might believe. Predock opened his own practice in Albuquerque in 1967, and has been winning local, state or national AIA awards since 1970. He has been in the Record Houses issue of Architectural Record seven times since 1970 and over 45 books on architecture have featured his work. He has also been featured in 35 articles in Architectural Record since 1970 as well as 25 articles in the now defunct Progressive Architecture between 1974 and 1995.
The more I thought about it, the more difficult it was to not become intimidated. What should I ask him? Should I speak to Predock the designer, or Predock the philosopher?  No, I’ll start with the basics. Besides, I was not going to try to pretend to be an architectural critic. This author had no sycophantic intentions, just sincere admiration for Predock’s work. His concept of the "roadcut," the summation of the intangible qualities of place that are explored through a multi-disciplinary investigation of the literature, art, culture, geology and history of the site are very intriguing as a programming or research tool. I am a fellow practitioner and would like to better understand the elements of Antoine Predock’s “roadcut.”  So I decided to start at the beginning. 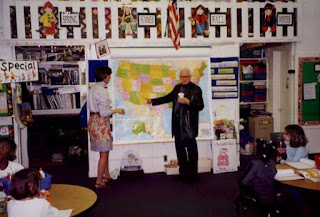 
Perhaps it is the summary essence of sensitive artist, talented craftsman, and cultural observer that is the “roadcut” of Antoine Predock. A seven hour visit revealed how multifariously complex his interests and personality can be. For example, he does get disappointed when he does not win a competition. He is proud of the work of his sons. He is eager to discuss his two grandchildren and “doggie” (of which he has emblazoned on his website). He is amazed at the size of Palmetto bugs (someone had mailed him one from Charleston.)  His first question upon arriving at the newly opened SC Governor’s School for the Arts and Humanities was “what is the cost per square foot?”  He is a Stan Musial bred but San Diego Padre born again baseball fan. He is humble. And perhaps the most telling of all: He sacrificed a day away from his office during a design charette in order to help the Kids in Architecture Program……….. 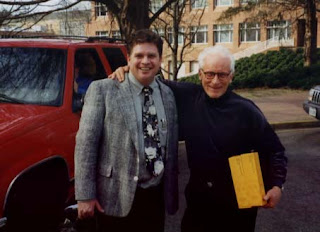 
I think I handed out my last portfolio brochure today. The client even said, "We don't need it, we can just look at your stuff online. "  My website hasn't been updated in 6 months...but years ago that was as good as being hot off the press. And so it never ends. The rules of marketing are changing so fast that by the time our brand spnkin' new brochure is designed, edited and printed the work is almost obsolete. Its like trying to be the lead car on the highway.   I have been coerced into accepting the fact that I will never be finished when it comes to digital or online marketing -so today I tackled the new beast in town...which to most people in the know, is not "new in town" anymore.  It has a big forboding letter H at the beginning of the word and in all of its arrogance it distorts one of the oldest words in the english language....Houzz.    Houzz it goin'?  Houzz about a little help?  Does your house Houzz many people?  In any event, I may not tame the beast but I decided to give it a go. (I am sure that next month there will be another latest and greatest marketing vehicle.) Anyway, I am now on Houzz. And its not an April Fool's day joke. I really am.  And I even understand they give out badges. Maybe I have to be Tron to wear them. I dunno but check out the firm's new Project Books on the latest and greatest..as of two years ago....

What we Architects do is not easy. It is a stressful existence scrounging for work and keeping clients’ happy while hoping to avoid lawsuits along the way.  Through 17 years of private practice, I have found humor to be the most effective mood changer and cartooning to be the best vehicle.  Over the last 10 years, the creation and evolution of  Archi-toons (Architecture + cartoons; get it?) has become both my private therapy and public soapbox.

I had dabbled with cartooning for years as I hand-drew my Christmas cards during the 80’s and 90’s.  The futurist John Nesbitt’s high tech/high touch reaction theory was valid; the more hours in a day that I spent on the computer, the more I enjoyed the old fashioned hand drawing of cartoons in my spare time.
I had always enjoyed the work of Alan Dunn, the noted cartoonist for The New Yorker and Architectural Record but there were no other humorists dedicated to the plight, struggles, idiosyncrasies, and daily experiences of the architectural profession.

Cartooning is a logical extension for the expression of our architectural talents.  The Architect is academically instructed and professionally trained to be an observer of life. Cartooning becomes the medium for a  re-presentation of these every day experiences…but with a twist. Archi-toons not only point out the obvious but often lampoon the self-righteous, praise the anonymous and fantasize what the profession could be.
A few of these early cartoons first appeared in my second book, the Architects Planner 2000. My editor had specified the page format for the book and my first official architectural cartoons were bound by those constraints. (That format is still followed to this day.)    It was the 2003 publication of Archi-Toons : Funniness, Comedy and Delight that this hobby of mine officially developed into something grander than I had ever imagined.

Part Far-Side, part Thomas Paine, part Seinfeld, a typical  Archi-toons panel is structured into an equation of three parts that include:
A. a message that provokes protest, touches the memory or promotes enlightenment.
B.  an element of humor, usually by exaggeration or satire
C. a singular,  attractive, simple graphic  image
Needless to say, the amount of material and experiences that I have to draw from my 25 years in the profession is boundless. From my days as a student at NC State and Clemson to a Project Architect at LS3P and TVS to my current occupation as an Architect in private practice, I can tell you there is funny stuff everywhere; yet these experiences prove most satisfying when a colleague exclaims: “I feel that way too!”  or “That happened to me!”

I personally feel we  Architects are,   by our education, licensure and training an exclusive bunch-few “outsiders” truly understand what we do.    In my Archi-toons, the stereotypical professional, the academic role model, the daily professional exchanges, the public’s perception of our craft and many icons of our industry are all “celebrated” in the broadest sense of the word. Cartooning, I have found, is not just therapeutic but can function as an effective method of communicating social commentary, cultural observation or just plain old funny stuff.   With apologies to The Godfather, only family can lampoon family…and that is what I do.

So here is a companion Blog where I park my cartoons:
http://archi-toons.blogspot.com/
I hope you like it!

Rick Bynum, AIA
Rick Bynum, AIA is principal of Bynum Architecture LLC in Greenville, SC. He is the author of 4 books: Archi-toons: Funniness Comedy and Delight, The Insulation Handbook, The Architect's Planner and The Handbook of Alternative Materials in Residential Construction. He has appeared on Modern Marvels: Insulation and has a Master of Architecture Degree from Clemson University and a Bachelor of Environmental Design in Architecture from North Carolina State University. Rick has been in private practice since 1996 and has produced an extensive portfolio of residential and commercial projects. Make sure you visit all of Rick’s “Archi-“ blogs !